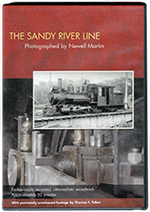 The SR&RL RR Museum and Stony Brook Press announce the release of a new DVD of historic films of the Sandy River & Rangeley Lakes Railroad. The black & white DVD features the films of Newell Martin and Thomas T. Taber that were taken between 1934 and 1936. The films have been digitally enhanced and an appropriate sound track added by Stephen Hussar of Preservation Media. Stephen is well known for his production of Gus Pratt’s films of the SR&RL, WW&F, B&H, and Edaville on behalf of the WW&F Ry. Museum. This film is of equal quality. The run time is approximately 50 minutes.

Part of the Newell Martin film has been available from JBL and often identified as the “Moody film” however, this is the entire film unedited and digitally enhanced, but with all scenes in the correct orientation and an accurate sound track added. This copy includes at least 6 minutes of previously unreleased Martin images as well as the Taber portion about 3 minutes long.